Updated: 12 April, 2022
With the health, safety, and comfort of our audiences, staff, volunteers, and artists as our top priority, Canadian Stage will continue to require proof of vaccination through May 31, 2022 including all performances of Crypto and Is God Is.

While the government of Ontario is lifting the mandatory check for vaccine passports as of March 1, we are choosing to keep our policy in place until further notice. We thank you for your patience and understanding as government policies are continually changing. 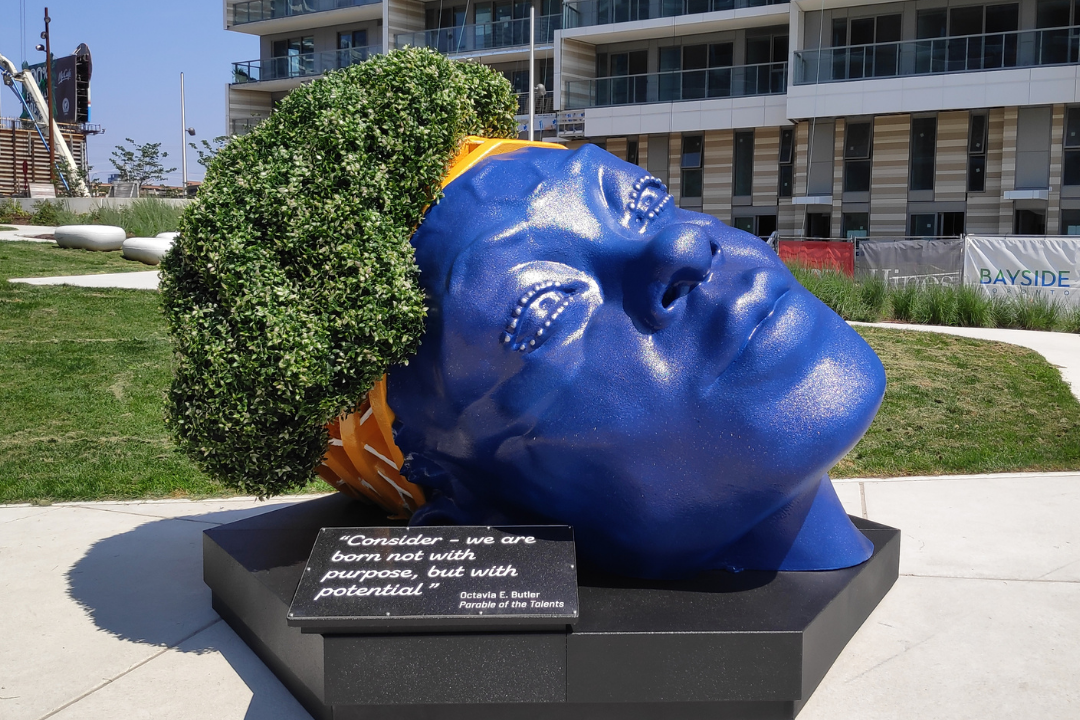 We asked community-engaged artists to respond to New Monuments in three commissioned interviews where they shared their research, work, and lived experience of the subject matter of the film. This is the second of three interviews in the series, conducted by Fiona Raye Clarke. New Monuments can be viewed for free on CBC Gem until Spring 2022.

Fiona Raye Clarke: New Monuments invites the question ‘what monuments we should be creating,’ and you all at the Black Speculative Arts Movement (BSAM) Canada have actually created one. Can you talk about Olamina?

Black Speculative Arts Movement Canada: Olamina is a 6-foot public art sculpture created for our Waterfront Artist Residency project, Earthseeds: Space of the Living, that's supported by the Waterfront Toronto and Waterfront BIA. She is a depiction of a water deity, stepping away from the water to take a peek at what we have been enduring on the land. Her vibrant blue skin shimmers like a mass of a thousand crystals when the sun kisses her face. Her hair is a playful boxwood shrub and the hue of saplings when they burst forth from the earth to signal new beginnings. The headwrap gathers her curls and acts as a vessel to hold the precious things that we offer her. And at the base of where she rests, is her essence:

FRC: Potential is such an important theme to this work. What did you all have in mind when you invoked this quote? What do you mean by ‘potential’?

BSAMC: Potential is a term that points to the ability to become something in the time that is to come. Time—being a relative conception of the seconds, minutes, hours, or days—needed to discover what that something will be. It swirls inside our abdomen like a windstorm and weaves itself into every node of our body. Each one of us, collectively, carry within us this force to discover, create, manifest and modify. Take Oya, for example: a Yoruba Orisha and the warrior who governs the wind, wields lightning like the fiercest of weapons and roars thunder. She is a bringer of change through destruction and rebirth, clearing paths for new growth with the swing of her machete, and guiding the dead as they transition. Similarly, we have the potential to cause great destruction but also bring forth new life. We can topple structures, figurative and literal, and shift obstacles to find new ways forward. We can be both the calm and the storm, two things that enact change.

There’s also Mami Wata, a water spirit with many forms who overlooks the bodies of water scattered across the globe. Straddling both earth and the water, they sometimes appear as human and switch between genders, or are a mermaid. Mami Wata hears all and sees everything that touches the water. They peer into the dreams of those largely made up of the precious substance, giving strength to those who have experienced great hardship and have come face to face with ruin. The waters that Mami Wata watches over are the bridge between this life and the hereafter. And like Mami Wata, we have the potential to tend to the water; go to it for healing and a deeper understanding of the concept of connection; be at home in the flow of life, reveling in fluidity, instead of remaining fixed and attached to things that stunt growth.

FRC: For those of us who are fans of the late, great Octavia E. Butler, the name Olamina is recognizable as one of her most memorable characters. Could you talk about your interpretation of the character and why you chose to pay homage to her?

BSAMC: Lauren Oya Olamina is the heroine of Octavia E. Butler’s Parable series. She is a young woman with a knack for survival and a drive to gather all the bad into a bundle and transform it into something useful. She created a philosophy called Earthseed to offer guidance through turmoil and endeavored to rethink how we form bonds with one another and our environment. Like Lauren, we have the potential and responsibility to question what doesn’t align with our core values; to restructure what doesn’t cause us to blossom and write other, new stories for ourselves and make spaces for people to live full lives that enrich and transform pain into splendour.

All of these potentialities merge in Olamina, a goddess that watches over the lakes and rivers of Ontario, who is both an embodiment of cultural folk tales and a bridge between water and earth. She emerged during a time of strife, when the ground opened up, during a global pandemic, to glaringly reveal the disparities amongst people of colour, most distinctly for Black and Indigenous peoples who have a storied history of violence and deprivation in their communities, as portrayed in New Monuments.

FRC: What did you want Olamina to ultimately symbolize or communicate to folks?

BSAMC: Olamina is a guardian of energy, communicating to us that we can turn to the water to understand collective dreaming and healing. Water creates ties and links, contrary to the common perception that lakes, rivers, and oceans are things that distance us. The purpose of Olamina is for the piece to be a holder of what could be. A collector of what is precious—what manifest as hopes, dreams, and affirmations—to all people. She exemplifies the fact that we possess the potential to be many things at once. We can do many things at once and contribute to communal well-being.

THE BLACK SPECULATIVE ARTS MOVEMENT (BSAM) CANADA started as an artist collective in 2016. Currently, BSAM Canada operates as a cultural arts non-profit organization led by multi-hyphenate queer artivist, Queen Kukoyi, and performance artist and scholar, Nico Taylor. It is the northern branch of the global movement. BSAM Canada seeks to empower, elevate, and evolve outlets of representation for artists of the Afrodiaspora (including Black African, Afro-Caribbean and Afro-Indigenous descendent people) who push imaginative boundaries, thereby contributing to broader and more vivid visual language of Blackness within arts education and the arts industries.

FIONA RAYE CLARKE is an award-winning Trinidadian-Canadian screenwriter and community-engaged artist. Her co-created short film, Intersecting screened at the CaribbeanTales International Film Festival and the Queer National Arts Festival. She was the winner of the CineFAM Short Film Challenge and a top ten finalist for the Magee TV Diverse Screenwriters Award. Her co-created kids animated series, MIXED UP, was a recipient of the CBC/Radio-Canada and Canada Council for the Arts Creation Accelerator and is currently in development. 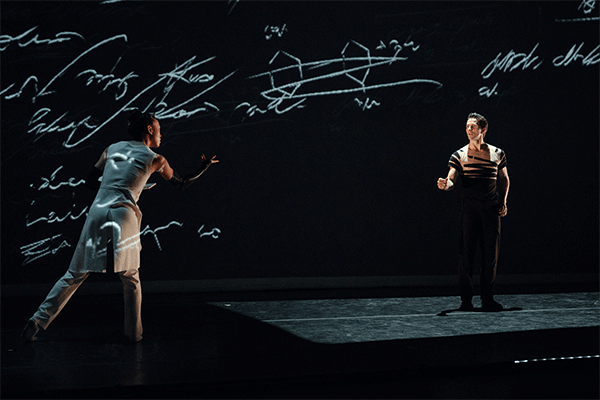 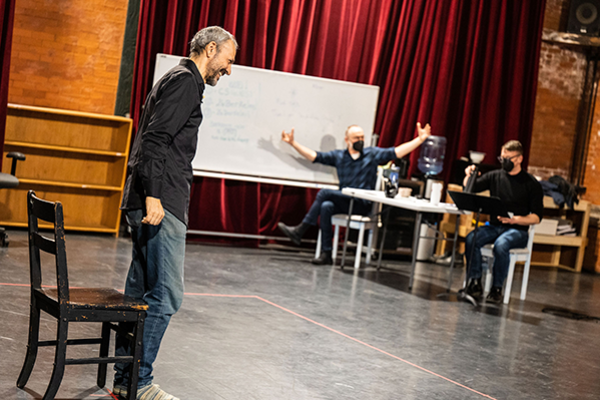 In Conversation with Other People Creative Team

We sat down with director Brendan Healy, dramaturge Daniel MacIvor and writer/performer Daniel Brooks, for an inside look at the play, Other People.

Watch the exclusive video interviews in this edition of CS Grid. 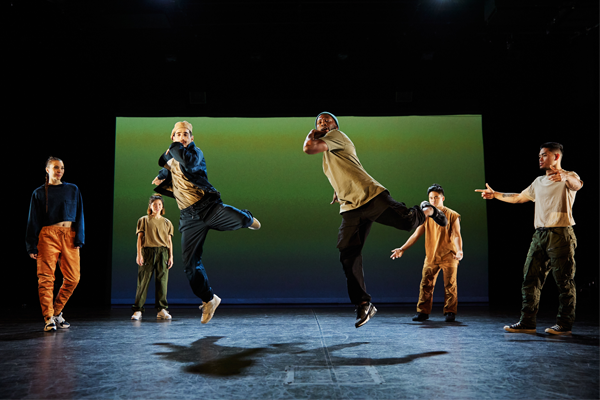 Get in on the In My Body hype!

Catch up on all the talk surrounding In My Body! Follow the dance crew backstage, learn more about the choreographer, Crazy Smooth, and find out about the journey that’s brought this new work to stages across Canada. Get a dose of the electrifying dance performance turning the entire notion of aging on its head. 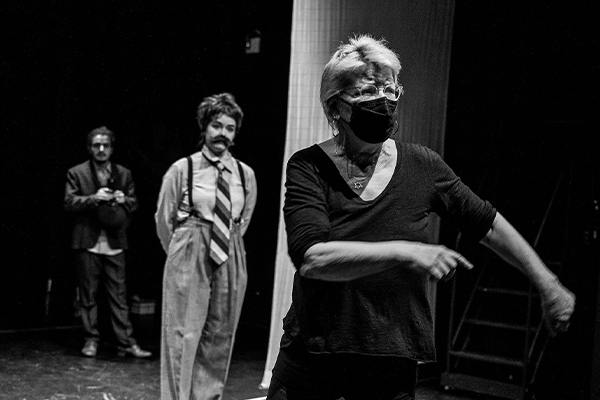